What Video Games Have Taught Me About Social Media

In life, you can take lessons from anywhere to help you in your journeys (this blog was started as a testament to that idea).  I’ve been playing video games for most of my life and would like to share some of the lessons I’ve learned from video games that can easily be applied to the world of social media.

It doesn’t matter how many times you fail.  It only matters that you eventually succeed.

Super Mario Bros., The Legend of Zelda and Battletoads all have something in common: their gameplay is based on the abundance of your “lives”.  While in games like Grand Theft Auto 3, Red Dead Redemption and Just Cause 2, there is no limit on the amount of times your character can die.  “What does that matter to me?” you might be asking.

No matter what you play, your failure (death) isn’t the end.  If you unsuccessfully storm Bowser’s castle you don’t have to return the game and never play again, you get another chance, and another, and another, and another, etc.  Social media is much like that.  There is no one way to practice.  If you fail, get right back up and try it a different way as many times as you want.  Just keep hitting the “Continue” button.

To gain XP, sometimes you have to do seemingly menial tasks over and over.

Maybe you’ve played World of Warcraft or one of the many games like it.  Your entire goal is to “level up” your character by earning XP (experience points for you non-geeks) so you can be stronger and faster and generally better prepared to deal with the world around you.  You can gain XP in a number of different ways by completing asks ranging from amazingly easy to frustratingly impossible.  Mostly you just do the easy stuff over and over and over again.

You don’t understand Twitter, you say.  Spend one month dedicated to following people in your field and replying every day whenever someone says something that interests you – Earn 768 XP, Level Up.

I wouldn’t even know how to get people to know my blog exists.  Comment on 4 blogs every day from other people in your industry, but only when you have something to add to the conversation.  Leave links to your posts on Twitter and answer questions that you know about in LinkedIn Answers – Gain 1,235 XP, Level Up, Earned New Title.

It’s always more fun when you play with others.

Whether it’s on your computer, Xbox Live!, the Playstation@Network, or simply using four controllers on your Nintendo Wii, playing video games with other people is always more fun.  Societies created games as social events where people could gather, compete and build communities.  Not much has changed in 3 centuries. 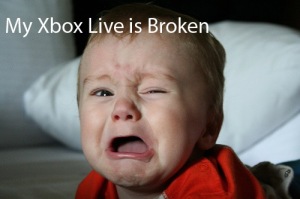 Once the Internet came around, we took the opportunity to take our personal journals online for everyone to see called “web logs” or blogs.  Why would we do that?

Because it is built into our genetic make-up to long for connections.  If we didn’t, our species would die out (and it would be super lonely).  Social media is the perfect way for us to connect and  we use it for tell each other our thoughts, what we had for lunch, where we had that lunch, etc., etc.  Social media is just that, media that allows us to be social.  Let’s take advantage of it.

You can be whoever you want to be, but it’s better when you create yourself.

I’m a big fan of the Guitar Hero games and one of the features they added a few years ago was the ability to customize your rocker.  Many games have this feature, but Guitar Hero is fun because you can create yourself and then “see” yourself rocking on stage.

The great things about avatar customization is that you have the ability to be whatever you want to be.  You want a blue spiked afro?  You got it.  You want to be wearing a clown costume and riding a bison?  It’s all you, buddy.  Whatever is most true to who you are, you can be that through character customizing.

Well guess what?  Social media will let you be true to your truest self too.  Anything that you want to be, be it.  You wanna write about how much you love movies? Do it, http://www.slashfilm.com did and they aren’t doing too shabby.  You wanna talk about things you’ve noticed that white people like?  Why not, you might even get a book deal.  If all you want to do is repeat things your abrasive father says, I’ll watch your new show on CBS.  Take advantage of the fact that you now can be who you truly are.

Well, those are the things I’ve learned about social media from video games.  I hope they have been helpful, but I’d really like to know if you have any to add to the list.  Leave those in the comments and if I get enough I’ll write a follow-up to this with all the new ideas.

So, what do you think?

Digital marketing sociologist and public relations specialist with experience on national and local campaigns with a love for film and the things it says about our culture and business. Joey is the Senior Social Media Strategist at ISM in Nashville, TN and is in the business of helping people and companies deal with the new universe of social media in their marketing and PR endeavors.
View all posts by Joey Strawn →
This entry was posted in Behind The Scenes and tagged facebook, marketing, Red Dead Redemption, social media, twitter, World of Warcraft, xbox live. Bookmark the permalink.